After a howling gale overnight a couple of intrepid members and a visitor headed out to see if anything had been blown in. 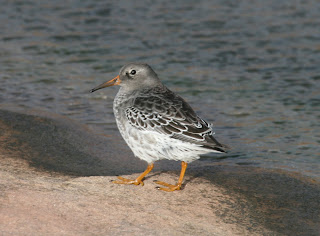 The first nice bird of the day was a very tame Purple Sandpiper, which had perhaps just arrived, which fed around the saltwater pool on top of the North End before the tide (see right). This later joined the others that have now built up to eleven birds. 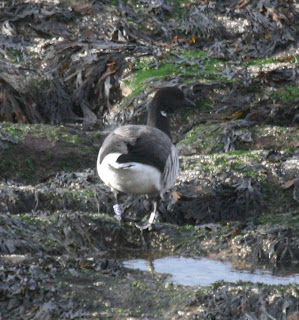 The Pale-bellied Brent Goose flock had obviously been supplemented since yesterday with groups of greese sheltering with heads tucked in on the sand on the east side. Later a count of 110 birds (the highest of the autumn so far) was made as the gutter flooded. The colour-ringed bird from earlier in the week (and last winter) was still present and a new adult colour ringed bird was found (see left) on the whaleback (information to follow on where and when this bird was ringed). 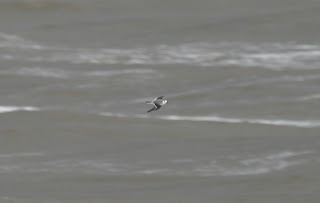 However, the highlight of the day was a Grey Phalarope which was spotted flying in from the North, it momentarily landed on the sea, before continuing to head towards the North End - all observers hoping it would 'ditch in' in front of the hide. Unfortunately, it got to opposite the North End then unexpectedly turned round (see left and below), probably in the face of the stiff westerly wind and it headed up the East Side towards West Kirby and was lost to view. 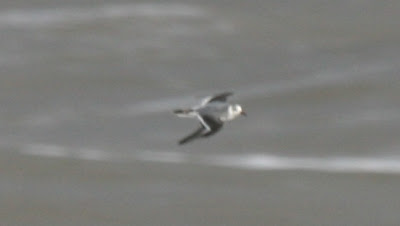 Passerines were thin on the ground although at least two Rock Pipits were present and a Redpoll dropped in to the Obs garden mid afternoon. A single female Blackbird was caught and ringed.
[DB +SH, et al] [697]