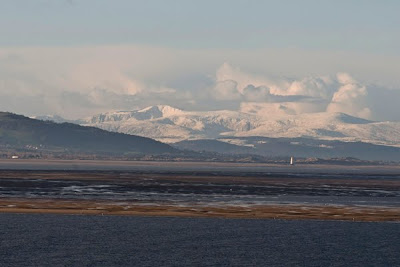 A sunny day with the snow looking beautiful over Snowdonia and a south easterly breeze that did not lift the temperature above freezing point all day, produced a small thrush movement of Song Thrushes (5) and Blackbirds (3) and a Redwing through early but nothing later, indeed there weren't even any Meadow Pipits or Linnets with just a single Goldfinch the only other non-resident passerine on the island. No Skylarks appeared but a flock of 4 Skylarks went over mid-morning.
Larger species fared better with an 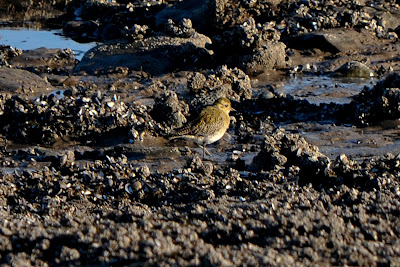 adult Mediterranean Gull flying west passed the north end and a Golden Plover near the east gutter (right). Ducks noted included 7 Wigeon with the Brent on the east hoyle, and 2 Pintail also on the east side. Two Common Snipe were flushed from the main pond and at least one was still in the vicinity a few hours later.
Ringed ;- 2 Blackbirds.
(DB,JE,CJ,PSW,SRW,TGW) [ 710] photos PSW
Posted by Colin at 09:33