going south including a party of 800 early in the day. Two Song Thrushes were trapped (right) but no Blackbirds were seen and the only other birds on the ground were the regular Robins, Dunnocks and Wrens, and a House Sparrow that landed in the obs garden and was around for a short while. A single Goldfinch overhead was the sole finch apart from the flock of 45 Linnets which spent a lot of time on Middle. 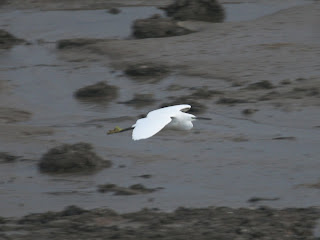 No divers on the sea, just 20 Great Crested Grebes and 150 Common Scoter, although the sea watch also produced 3 Wigeon and 2 Whooper Swans flying towards Hoylake. 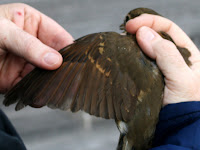 A Dark-bellied Brent was among the 118 birds seen today and 4 Little Egrets (above) were on the shore.
Ringed :- 2 Song Thrushes (right, showing clear moult limit in the greater coverts of a bird of the year)
(DB +ESCA,JE,CJ,PSW,SRW,TGW, +SH) [699] photos CJ
Posted by Colin at 14:08