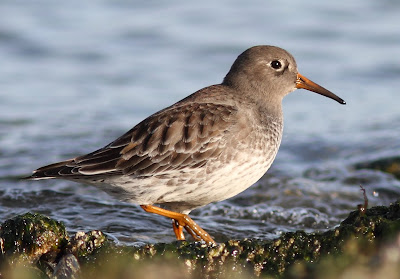 Overnight rain did little to disuade observers this morning. The moderate south-easterly breeze and beautiful blue skies prompted morning visits by a couple of members supplemented later by a couple of visiting birders.

A Snow Bunting was heard several times as it passed over the main island mid morning and was the highlight of the morning's observations. 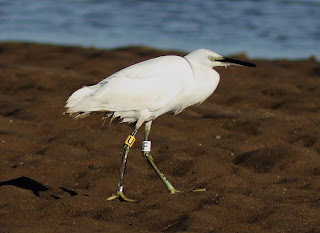 The colour-ringed Little Egret (left and below) was one of four birds around the tidal pools between the islands during the afternoon. 120 Pale-bellied Brents were counted and Purple Sandpipers were spread out and less easy to count with at least 15 noted, however, some were very photographable (see above).

On the sea single Red-throated Diver was close in off the West Side and up to 45 Great Crested Grebes floated about in loose groups off the North End and four Goldeneye were seen including a couple of stunning males. 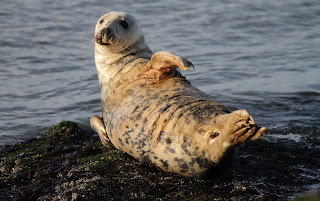 A single Grey Seal was hauled out at the North End (see right), where two or three Rock Pipits spent the day. 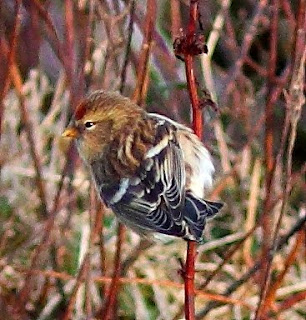 A single Redpoll appeared in the gardens at lunchtime (see left). Later a couple of Obs members decided an afternoon return visit might be productive ... but it was a visiting birder (SR) who had the surprise of the day as he left the islands, he heard and then watched four Waxwings flying over the estuary between Little Eye and West Kirby.

A phonecall alerted the Obs - "the Hilbre book" came out, these were the first Waxwings for Hilbre since 19th November 1961 (note the coincident date)! Much discussion was had on the Obs balcony, including some consolating words, and someone even said "don't worry with the current influx it may not be that long before we get another one"... little did we know it would be so soon!

Incredibly, fifteen minutes or so later stunned observers watched from the Obs balcony as a single Waxwing flew down the east side of the island (just over the BBQ) and off south heading over to Middle and away to the south. Speechless looks were exchanged before the usual celebratory handshakes began. Another great day on the island.