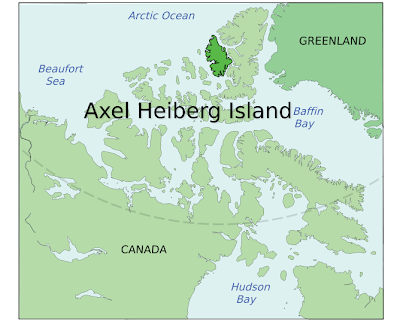 Here is a map (author Kennonv on Wikipedia) which shows where Axel Heiberg Island is in Arctic Canada, where 'HDRB' was ringed on 2nd August 2007. Axel Heiberg Island is an island in the Qikiqtaaluk Region, Nunavut, Canada. It is located in the Arctic Ocean and is the 31st largest island in the world (and Canada's seventh largest at 16,671 square miles - info from Wikipedia). Bathurst island (the large island below the "be" in Heiberg on the map above) was where Hilbre's first colour-ringed Brent Goose ('XXYY') was seen on breeding grounds during the summer of 2007.
Posted by Hilbre Steve at 19:18