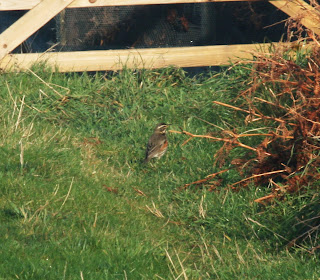 Cold, clear and sunny this morning with light easterly that brought parties of Lapwings, below, (total 51), Starlings (45) and Skylarks (20) across the island but not many finches, just a largish flock of Linnets and 2 Greenfinches. Twenty Blackbirds were already present from dawn with 5 Redwing (left) and 4 Song Thrushes but no other significant passerines apart from 3 Goldcrests. 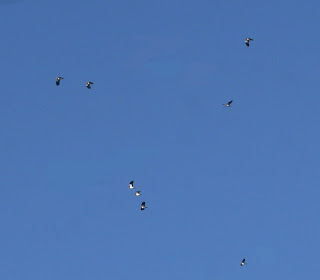 One hundred and ten Carrion Crows flew north east up the West Kirby shore, also early in the day 3 Wigeon, a Teal and 2 Common Snipe were close to the islands. One of the 4 Little Egrets on the shore shore was seen to be colour ringed.
More Brent must have arrived last night as 97 were between the island and Red Rocks this morning.
Five Purple Sandpipers roosted the tide on the main island at the north end with a few Turnstones, while Middle was host to at least 8,000 Oystercatchers, some Curlew and a few smaller species. The sea was fairly quiet yet 4 Red-throated Divers, 13 Great Crested Grebes , 50 Common Scoter and 3 Guillemots were seen. 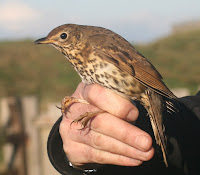 A moth found resting on the obs veranda was identified as being a Tawny Pinion, a scarce species, its status at Hilbre being uncertain at this stage but it could be the first of its type recorded here.
Ringed:- 7 Blackbirds, 1 Song Thrush (right), 1 Goldcrest.
(DB +ESCA,JE,CJ,PSW,SRW,TGW) [696] photos CJ
Posted by Colin at 15:09