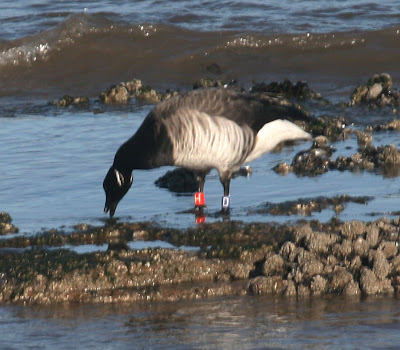 A different colour ringed Brent was present today (left), however it was the red and blue ringed individual that has now appeared for its third winter at Hilbre after previously been seen many times in the Dublin Bay area. He was orginally ringed (as an adult male) on Axel Heiberg Island in Canada on 2nd August 2007.

Other wildfowl were 4 Wigeon that spent some time with the Brents at the north end before taking to the tide (below).
A Merlin stayed around for about an hour, during which time it was seen to be carrying a kill on one occasion. A Kestrel and a Peregrine completed the trio of raptors for the day. 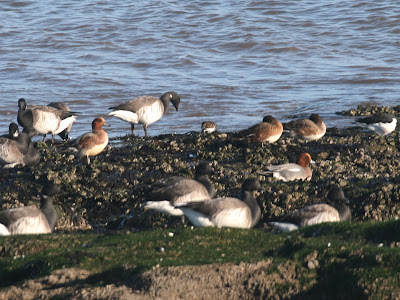 Four Rock Pipits was a good total, one was re-trapped that had been ringed here on 7th October this year.

Passerines were few, a flock of 40 Linnets, 3 Goldfinches, 2 Blackbirds and a Song Thrush were the pick apart from a Redwing that dropped into the paddocks but unfortunately did not stay. 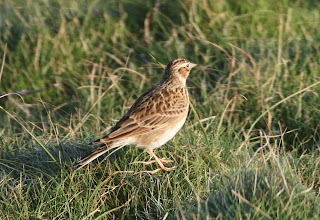 Starlings again passed in numbers early in the day including as group of 500, but only a single Skylark went over during the morning although later one was on the ground on Middle (left).
Great Crested Grebes were by far the most numerous of sea birds (25) with very little else to attract attention on the sea.
Ringed:- 1 Blackbird
(DB,CJ,KMc) [700] photos CJ
Posted by Colin at 18:31