Weather: SE force 3/4, very misty around the coast
If yesterday was the day of the Chaffinch, today was certainly the day of the thrush, with a steady passage in small groups during most of the morning of  Redwings (30), Fieldfares (16), and Blackbirds (24), while over 600 Starlings passed through constantly, mostly in parties of less than a dozen but with one flock of 150 birds. On the way to the islands a Lapwing flew over the east hoyle, a Common Snipe flew up from the ridge south of Middle (2 more flew over the main island later) and a couple of Song Thrushes were on Middle itself together with sightings of Redwings and Blackbirds and 9 Wigeon near the lagoon (another drake stayed around most of the day, below right CJ). 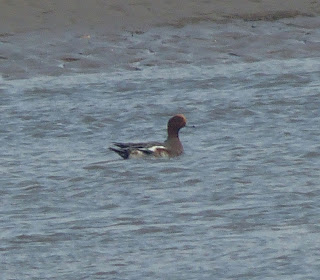 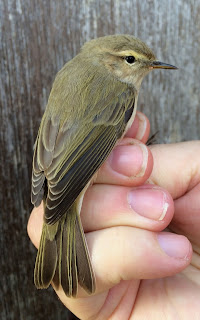 The first round of the island caught 4 Blackbirds in the Newton, but neither Redwing nor Fieldfare seemed interested in entering the traps, and this applied all morning. A male Blackcap was found in the obs garden and 2 Reed Buntings flew around late morning, also late morning the first of 3 Skylarks called overhead and then a Brambling and a Goldfinch went over, the only finches today (in complete contrast to yesterday) apart from the 30 Linnets. Four more Blackbirds were caught in the 'heli' in one go and then another in the SK, which also a while later sprung the surprise of a Chiffchaff that was new in (right CJ), the first seen on the islands for over 2 weeks. Other land birds logged were 3 Pied Wagtails and 4 Rock Pipits and both Peregrine and male Kestrel were seen during the morning. One of the highest tides of the autumn produced a roost on Middle Eye of at least 4,000 Oystercatchers with 85 Curlews and a Purple Sandpiper, another was at the north end of the main island, while a flock of 2 thousand Knot could be seen towards the West Kirby shore. 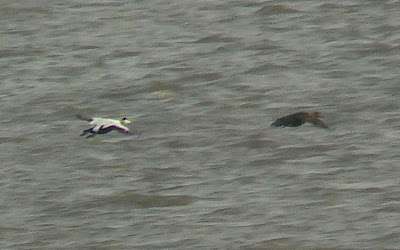 Two Eiders were seen from the obs flying south down the east side (left,CJ), meanwhile a sea watch from the north end produced many records including 5 Red-throated Divers, 5 Gannets, 1 Red-breasted Merganser, 54 Common Scoter, 37 Guillemots and 29 Razorbills.


The Brent peaked at a new high of 90 birds including the dark-bellied bird and the blue and red ringed individual, while 100 Shelduck were off the east side on the ebb tide and on the shore were 4 Little Egrets. 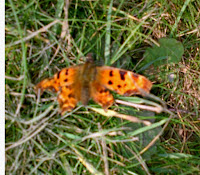