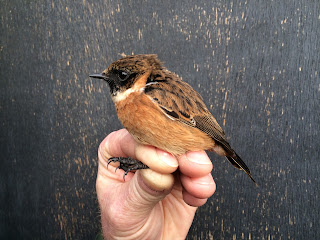 The male Stonechat from yesterday was still present and today was caught for ringing (right), the first ringed since one in March. It was fairly quiet today overall and certainly not as many Goldcrests, perhaps 5 and no Chiffchaffs. A Song Thrush was on early giving hope of some other thrushes but none were forthcoming and passing birds were few indeed, with 3 Skylarks, 2 Goldfinches, 2 Pied and a Grey Wagtail, although extra Robins seemed to be present and small numbers of Meadow Pipits passed through. Even the Brent were down in numbers with a group of 10 floating up the east side on the ebbing tide, and 4 Little Egrets were also less than the 10 yesterday. Three Great Crested Grebes, 7 Common Scoters and a Guillemot were on the sea, while 60 Turnstones roosted at high tide and 106 Redshanks were counted.
Ringed: 3 Goldcrests, 1 Stonechat            [ 530-39 ]
(JE,CJ,NDW,CJW, et al)                           photo CJ
Posted by Colin at 14:57