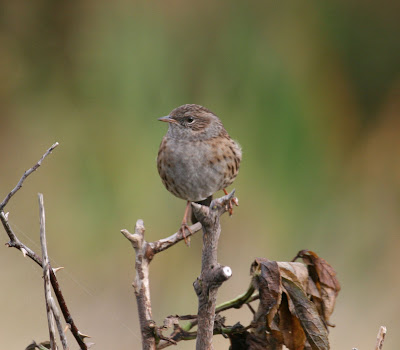 Apparently ideal conditions today did not result in any sort of 'fall' although a few species visited this morning in very small numbers. Another Grey Wagtail went over, also a flock of 5 Chaffinches and a few Swallows. A single late Willow Warbler was grounded and was later joined by a Dunnock (left) and a Reed Bunting, otherwise the gardens held only Meadow Pipits, Robins, Wrens, and a few Linnets, although 3 Wheatears stayed mostly in the open areas at the north end. 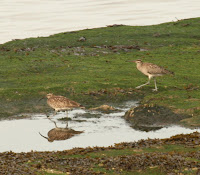 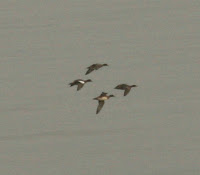 A group of 4 Wigeon flew east (left) without pausing, the only other interest around the shore was a Little Egret, and 2 Whimbrel (right).
A peregrine was seen to be eating its kill on the sand, and when it departed the remains were

examined and found to be that of a young Knot with complete wings and not much else (right).
Ringed:- 1 Willow Warbler,
1 Robin
1 Meadow Pipit
1 Dunnock
(BSB,DB,JE,CJ,KMc,DCT,PT,NDW,PSW) [505] photos CJ
Posted by Colin at 13:29