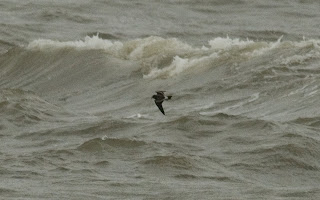 A mammoth Saturday turn out of members for the sea watch today were greeted by the sight of an Osprey that had been seen flying around 07:45hrs and which then landed on the west hoyle bank and stayed there for best part of an hour, enabling all to connect with this first Osprey of the autumn.
Eight hours of continuous effort and spurred on by the report of a Wilson's Petrel in the Mersey, observers certainly produced an impressive list, although it has to be said most birds were distant. Star bird of the sea was a juvenile Sabines Gull that was seen briefly flying out to the west. Arctic Skuas made a real come-back with no less than 34 individuals, also Great Skuas had their best day of the year, numbering 10. There were no Storm Petrels but 13 Leach's (above) showed during the period and Manx Shearwaters were totalled at 47. Two hundred and fifty one Common Scoter, 52 Gannets, the same number of Kittiwakes, 7 Fulmars, 3 Red-throated Divers, 10 Guillemots and a single Razorbill completed the picture on the sea, together of course with the usual terns.
With so much emphasis on the sea, we should not forget the 6 Swallows, 2 Wheatears and a Chiffchaff blown about on the land !
After the tide most members evacuated the island to go and twitch the juvenile Sabines Gull on the Hoylake/Meols shore (see below); crippling views were obtained by all and especially pleased were those 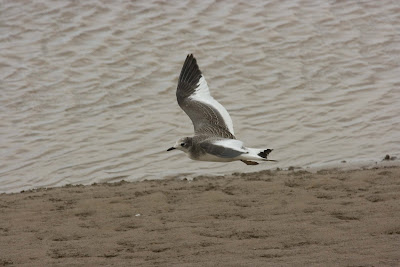 who had not managed to see the Hilbre bird.
Ringed :- 1 Chiffchaff. 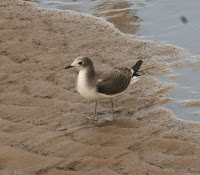 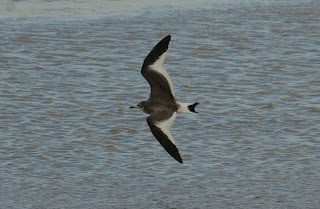 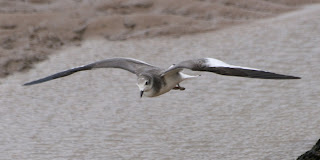