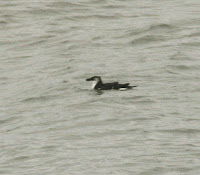 The trapping areas were again devoid of birds this morning, even Meadow Pipits and Robins were hard to find, surely the north easterlies will bring something before the end of the week.
Three Wheatears made it to Hilbre but went through quickly, and a loose flock of 20 Swallows (the only ones seen this morning) flew north east well out over the sea. It is puzzling why they were apparently moving from Wales in this direction, although the head wind would give plenty of 'lift'. 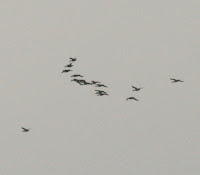 Still some Wigeon about the islands, a total of 11 were seen in small groups, and for a change a flock of 15 Pintail flew north (left). Three Razorbills (above right) and a Guillemot were feeding close in shore and 2 Little Egrets landed east of Middle.
Later, 10 Pink-footed Geese flew north east.
(AAB,DB,CJ,THM+3, CF) photos CJ
Posted by Colin at 13:13