The continual moderate westerlies this week have meant a generally quiet week on the island, although Obs members have been covering the island daily.
This morning produced another two Ravens - probably the same two birds that have been seen around the islands or at West Kirby shore during the last week or so.
The highlights of the rather quiet morning were two Goosanders that flew past the North End and a pair of adult Pale-bellied Brents arrived back from Canada and spent the morning in the surf (see photos). 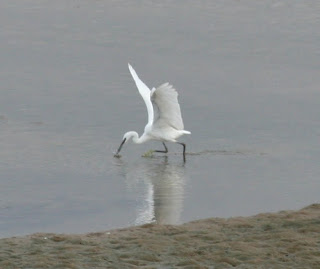 The regular sight of a single Little Egret danced around the gutter (see left) - noteworthy is the count of 315 Little Egrets coming into roost at our local RSPB reserve (Inner Marsh Farm) last night.

Finally, a single Chiffchaff appeared in the Obs garden mid morning and a solitary Swallow passed over.
(CJW, SRW) Photos CJW
Posted by Hilbre Steve at 22:18