Four more Wigeon going west first thing this morning was followed by a flock of 7 Little Egrets (right) flying off east from the west side tide edge. A party of 8 Teal was then discovered in the lagoon between the islands.
A Chiffchaff was in the obs garden giving hope of some migrants today, but it proved to be a false dawn as after a search it turned out to be the only warbler on the island. 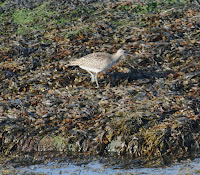 Swallows passed east today in small numbers, but no other visible migration was evident, and 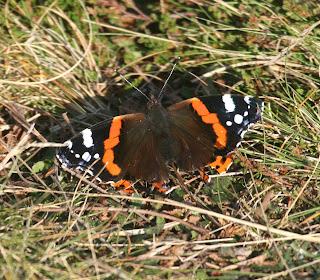 for the first time recently no Wheatears were present.
It seems there is only one Whimbrel (above) still around the rocks.
Late afternoon 2 Snipe dropped in to the east gutter.
There were some Red Admirals (right) and a few Painted Lady butterflies, also a single Speckled Wood.
(CJ,later DB) [512] photos CJ
Posted by Colin at 11:25