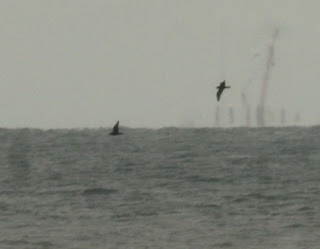 Sea watching was good but fairly distant today despite the southerly wind and showery rain and most activity was in the direction of the Rhyl flats wind farm. Over 100 Manx Shearwaters, 80 Gannets and 34 Common Scoter were noted, and for a change 5 Arctic Skuas showed and chased the terns feeding in the same direction. Two of the Skuas seemed to be hunting in tandem for prolonged periods (left). 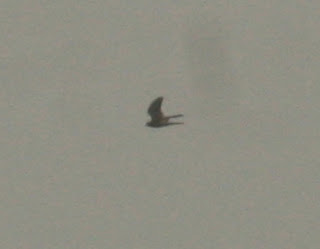 An unexpected bonus during the sea watch was a Harrier which seemed to be crossing from Formby point towards Wales (right), it was too distant to identify specifically.
The early Purple Sandpiper from yesterday may still be around but was not seen today.

One of the young Pied Wagtails that bred on the island was ringed today, also one Wheatear (not a Greenland) of six present, the first ringed this autumn.
Ringed:- 1 Meadow Pipit, 1 Robin, 1 Pied Wagtail (below, also showing colour contrast in new and old feather tracts), 1 Wheatear (below right) 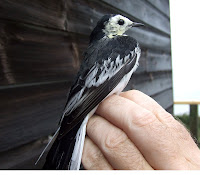 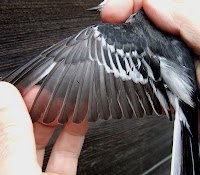 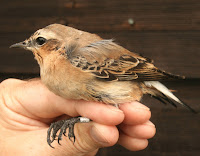