Wind lighter and from the east this morning but no warblers were found at all, and not even any Swallows passing, although 6 Wheatears were present for at least some of the time. 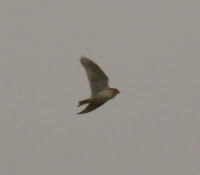 The 2 Ravens were flushed from middle this morning, and they seem to have established a pattern of visiting Hilbre from the mainland and then going on to Wales; today they were then also seen to return from the west an hour later and continue back to Wirral. 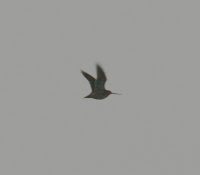 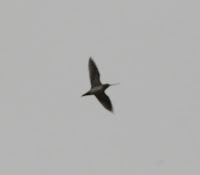 A Common Snipe (right, scarce at Hilbre) got up between the islands and flew east towards the West Kirby shore, and later two Skylarks (above, another infrequent visitor on the ground) arrived and landed on the south end. 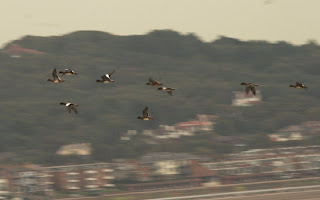 The run of recent duck records continued with 9 Wigeon (left) flying around the lagoon but deciding not to stay and give a decent photo opportunity. 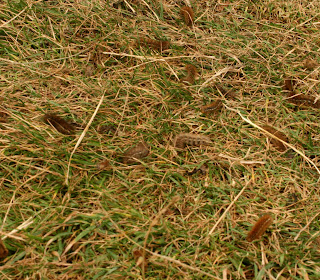 Shelduck were up to 38, but only 4 Sandwich Terns could be found, with little else on the sea except a Red-throated Diver, a Great Crested Grebe, 20 Common Scoter and a couple of Guillemots.
No sign today of the Purple Sandpiper.
For the last week the bracken has been covered with caterpillars of the Buff Ermine moth (above right) in outstanding numbers and paths in the trapping area have been especially attractive for them.
In the afternoon, a single Swallow made it to the island, also 5 more Wheatears, and a family party of 5 Mute Swans including 3 cygnets arrived and stood out on the whaleback for a short time. A late Hummingbird Hawk moth fed on the Honeysuckle overhanging the obs veranda for a few minutes and then Nine Pink-footed Geese landed on the west hoyle; mornings are not always best !
Ringed :- 2 Robins
(DB,CJ,KMc) [517] photos CJ
Posted by Colin at 14:23