Quiet again ! Very small numbers of migrants at the moment in common with most coastal watch points - just the odd few birds to try and get excited over. After Wheatears yesterday, none today; after no warblers yesterday, 4 Chiffchaffs today. There was a small movement of a few dozen Meadow Pipits and Swallows but little else apart from a an increase in Linnets and a Grey Wagtail. 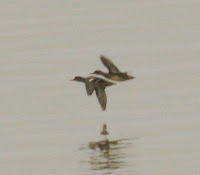 The 2 Ravens were again mobbed by crows over middle and ducks again featured with a single Teal which later gathered a second in its company (left) and finally they became a party of 5 by noon.
The wader roosts on a very high tide were much disrupted by various human activity, although the Little Eye area managed to assemble a grand total of 238 Shelduck. 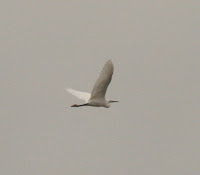 More terns than was expected this late, with 26 Sandwich and 4 Common seen during the morning. The 2 Little Egrets (right) were par for the course in recent times.
Ringed :- 2 Chiffchaffs
(DB,CJ) [519] photos CJ
Posted by Colin at 15:42