The 2 Ravens were again in the marine lake car park at first light, there must be some attractive scraps for them there!
Two more Chiffchaffs today but again no Wheatears but a small movement of some 50 or so Meadow Pipits flying in loose gatherings around the open grassy areas and a number of Swallows went through. There seems to be an increase in Robins on the island today and Linnets are up to 14 together in a flock. 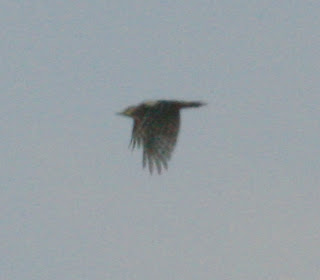 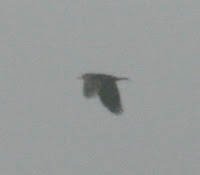 Slightly less rare but still scarce were 2 Rooks (right) heading from the west across the Dee.
Eight Bar-tailed Godwits were on the tide edge to the east and 2 Little Egrets in the gutter, while 12 Great Crested Grebes showed on the sea.
Ringed :- 1 Robin, 1 Chiffchaff.
(DB,CJ,SRW) [530] photos CJ
Posted by Colin at 16:42