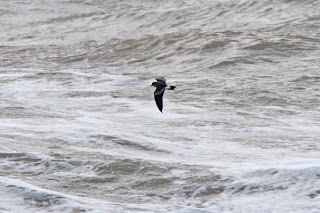 Despite the north-west wind dropping to force five overnight, an almost continuous sea-watch manned by members and visitors from 7am until 745pm (excluding a couple of half hour breaks) produced yet another incredible day on the island. 524 Leach's Petrels (see right) were counted throughout the day with the main passage early morning (over 200 before 10.30am) and over the afternoon tide (over 200 from 3pm onwards). A remarkable total of four Sabine's Gulls were recorded today including a single juvenile late morning.

However, those members who work arrived late afternoon/early evening and had another intrepid member of the Obs to thank, he had walked out to the tide edge on Hoylake beach and found two different juvenile Sabine's Gulls, informing the sea-watching hide, allowing those on the island to pick up two and then incredibly a third bird (with two birds seen together). 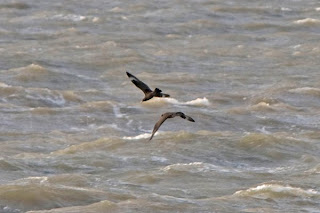 Three Bonxies and 25 Arctic Skuas (see left) were recorded including a Bonxie that spent much of the day devouring dead birds on the East Hoyle sand bank. Other highlights today included 32 Pink-footed Geese flying towards the Lancashire mosslands over the sea following the first arrivals seen yesterday.
The sea-watching, and in particular counting of Leach's Petrels, continued right up until the sun set (see below). 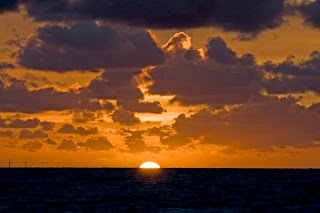