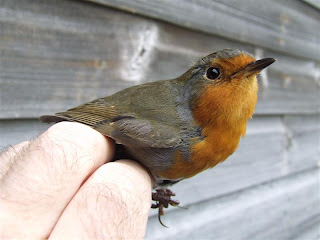 The wind had picked up again from the south west but once again the island was well covered today by members. Five birds were caught of five different species - a retrap Dunnock and Wren, with new Meadow Pipit, Robin (see left) and another Goldcrest (see below). 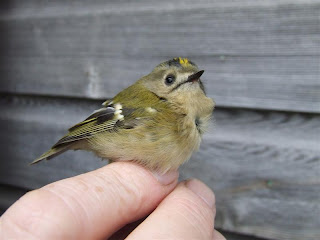 A short sea-watch produced four summer plumaged Red-throated Divers, a single Gannet and a few auks and Great Crested Grebes, but nothing like the last week! However, unusual sightings continued with a Greenshank flying around the North End and a Little Egret flying over the gutter.
A flock of eight Snipe was an unusual count for Hilbre and presumably the juvenile Pale-bellied Brent Goose, first seen on Thursday, re-appeared south of Middle Eye. The first Rock Pipit of the autumn was heard at the North End and later confirmed when it was found feeding amongst the sea-weed there in the afternoon.
A tour of the tideline from the East Hoyle around the gutter to Hilbre produced 50 dead birds following the recent gales. Mainly auks (30 Guillemots and 17 Razorbills) a couple of gulls and most interestingly a Coot (a rare bird in the Hilbre recording area - dead or alive).
As the sun set on another superb week of recording on the island (particularly the North End), with easterly winds forecast soon what will the focus of next week be ... ? 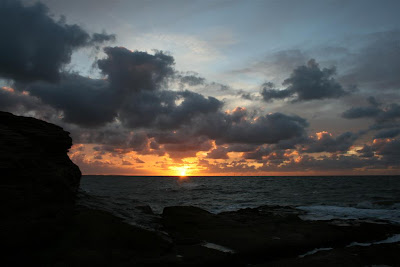