With very light winds varying between south, south east, north and north east it turned out to 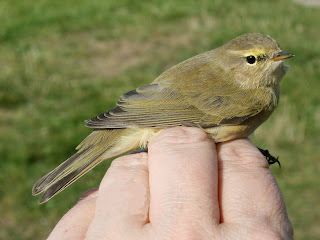 be another beautiful and warm day, which however did not produce many new birds on the ground but there was evidence of passage with about 60 Meadow Pipits flying around the island, 2 Tree Pipits heard with 3 Grey, 1 White and 9 Pied Wagtails seen overhead and 55 Swallows passing through. Two Chiffchaffs and a long staying Willow Warbler were in the gardens with a few new Robins continuing the run of these birds this last few days. The Chiffchaffs in the last week have been calling with what sounds like the dialect of the northern race abietinus, as were the birds ringed today (right), although young birds do not always make the typical call. 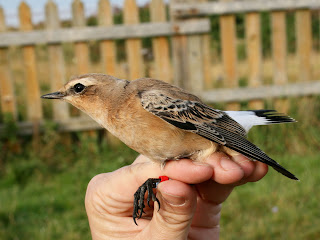 The only large warbler was a Whitethroat found on Middle Eye, also on its own was the Greenland Wheatear (left) which however, fed at the potter traps and was ringed. 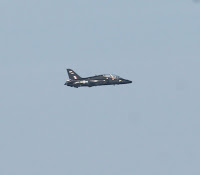 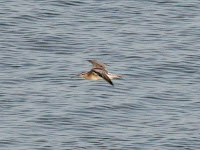 Off shore not a lot of note, 2 Little Egrets, 2 Guillemots, with single Red-throated Diver, Whimbrel (left), and a RAF 'Hawk' trainer being the highlights. 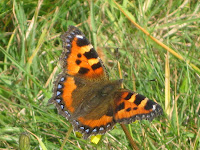 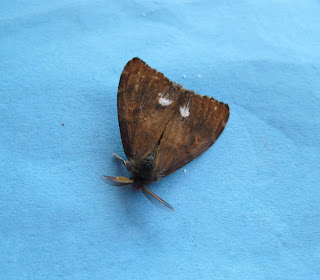 Small Tortoiseshell (right) and Small White.
One of the important findings recently was the proof of breeding of the Vapourer Moth (left) at Hilbre.
A cocoon of the moth was found in the winter and again this month in the Blackthorn with eggs and the moth itself has now been seen several times including twice today. Vapourer moths are diurnal, but will come to light at night and are not uncommon on the mainland. The male (see photo) is quite distinctive but the female is nondescript and flightless.
Ringed:- 3 Meadow Pipits, 2 Chiffchaffs, 1 Greenland Wheatear, 1 Robin.
(DB,CJ,CLW,NDW,TGW,CJW,GIW, et al) [427] photos CJ, NDW(Small Tortoiseshell),TGW(Vapourer Moth).