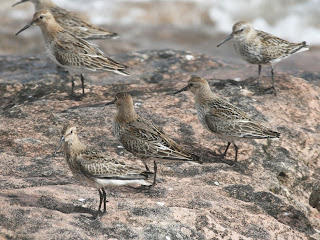 What a difference a day makes ! With the wind in the north west this morning all the phylloscopus from yesterday had departed overnight which is unusual as the day after a big fall there are normally some birds still present or even a few new ones. Only the 2 Goldcrests heard calling this morning could be considered as new birds in. A single Swallow passing by mid-morning turned 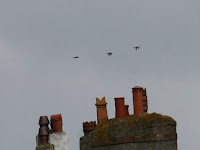 out to be the only one during the whole day.
An early Rock Pipit was on Middle, and 3 Pintail flew west across the north end (right).
Seabirds were best well before the tide when 4 Gannets and 2 dark phase Arctic Skuas were off the north end, the highlight of the high tide period was an adult Kittiwake quite close in. 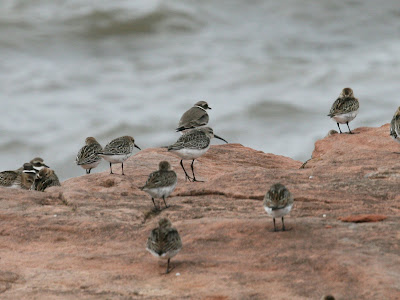 The extremely high tide at midday forced the small waders to rest on top of the north end of the island, enabling close study of the 900 or so Dunlin (above), 80 Ringed Plovers, and 9 Sanderling. A Curlew Sandpiper (right, centre of picture) was recognised amongst the flocking Dunlin by its longer legs and bill, paler plumage, and suggestion of a supercilium.
No Little Egrets today but 35 Bar-tailed Godwits are still present. Three Greenshank, 150 Sanderling and 150 Ringed Plover were on the flooding tide edge. 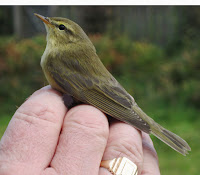 In the afternoon the ringing duck was broken when a fresh Willow Warbler (left) arrived in the paddocks just as the observers were leaving.
(DB,CJ+VB,NDW+VMcF+1) [516] photos CJ, VB.
Posted by Colin at 17:53