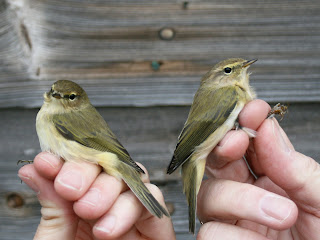 A pleasantly warm south easterly this morning with lots of mist in the estuary brought at least 10 Chiffchaffs (left) to the island, with an increase in Meadow Pipits (52) and Linnets (75) to join the resident birds. The only other interesting passerine was a Reed Bunting touring the paddocks all morning. A Common Snipe was flushed between the islands, while a lone Swallow travelling south was the sole hirundine.
On the sea was a single Red-throated Diver, a 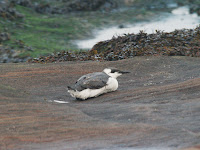 Great Crested Grebe but a Guillemot (right) preferred resting on the rocks at the north end.
Towards noon a Common Sandpiper was about the rocks and 2 Purple Sandpipers were found at the north end - probably the first of the wintering flock to arrive.