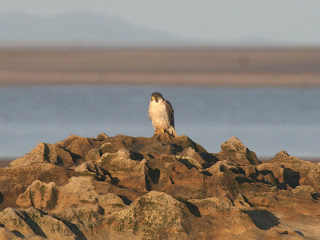 A beautiful sunny morning with a cool northerly wind saw the Peregrine on its usual pearch south of Middle early in the day (left). A Greenshank called off the West Kirby shore near the Marine Lake, and a couple of Grey Plovers later flew by Little Eye but interesting waders were otherwise absent during the low tide period. Grounded migrants were nil, whilst overhead were 3 Grey Wagtails together, also a single Goldfinch and a Skylark. 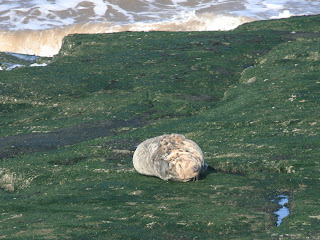 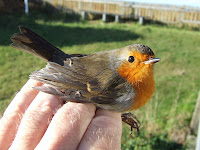 A large female Grey Seal spent the morning lazing on the whaleback (right) and a male briefly joined it and then later swan nearby. An immature or juvenile Eider was seen later in the day.
Ringed : - 1 Robin (above)
(GB,JE,CJ,BT) [555] photos CJ & JE (Robin)
Posted by Colin at 12:09