The wind had finally dropped by Saturday morning although it remained in the north-west, but undettered observers ventured to the island for the early morning tide. 7 Leach's Petrels were noted in singles drifting past from early morning onwards and the Great Skua remained on the East Hoyle sand bank from yesterday - devouring dead auks no doubt. A couple of summer plumaged Red-throated Divers were seen on the sea as was an adult Kittiwake. 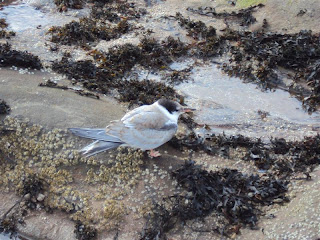 The drop in the wind had produced a trickle of Goldcrests including two birds caught (female far left and male) and a few Robins were present with one new bird trapped.

A single Pintail was on the ebbing tide and a Black-tailed Godwit flew over as observers left the island mid morning. A juvenile Common Tern has been seen at the South End of the main island over the last few days occassionally being fed by an adult (see right).