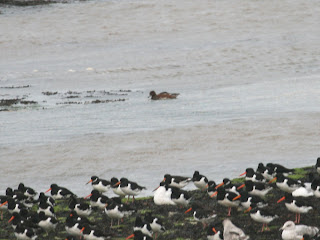 Off the island this morning due to work and other commitments (and the incoming tide) by 08.00hrs but plenty of time to check whether any warblers had landed overnight, but they hadn't. Swallows came battling through in small numbers against the very strong south easterly wind, and autumn duck again appeared - 6 Pintail, 4 Teal and a Wigeon (left), also Shelducks are now building up with 22 counted today.
Sandwich Terns, about 500, were feeding vigorously 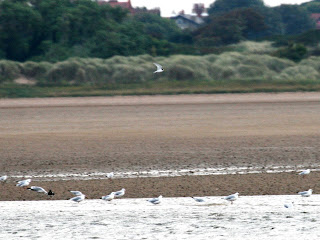 down both sides of the island into the wind and it was pleasing to see 3 Little terns hovering over the east side gutter (right) as these seemed to have lost the habit this year.
There was not much time to spend scanning the shore but 2 Little Egrets, 12 Bar-tailed Godwits on the east hoyle and 50 Sanderling at the west side tide edge were noted also 8 Common Scoters and 4 Great Crested Grebes on the sea.
Ringed :- nil
(CJ,KMc,SRW) photos CJ
Latest:- After the tide at 13.15hrs a Stone Curlew was flushed from the south end of the island near the slipway, it flew off towards Wales. This is the first record for Hilbre. (DB).
Other records from later in the afternoon included the yellow and white colour ringed Little Egret ( also seen at Heswall recently), a single Willow Warbler, a Greenshank, and 1 Teal with 5 Wigeon.