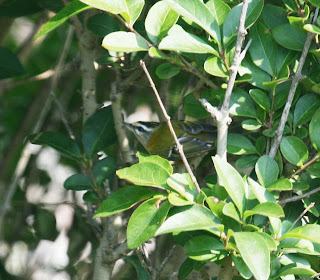 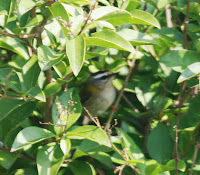 Wouldn't you know it ! The first day in weeks when there was no obs presence on the island, a Firecrest is reported at Hilbre on the information services. Several members organised themselves to get across to see if many other migrants had arrived last night, searching all the likely areas in turn and including the rangers garden (with permission) where the Firecrest had first been seen. The bird was duly in the garden happily feeding in the sycamore and privets, but later it flew to the old obs garden where a mist 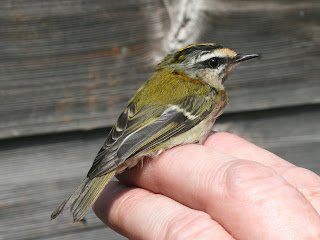 net was in place and the bird captured itself and was taken back to be ringed. The Firecrest was a first year bird, probably a male and looked splendid in the hand, it is the earliest autumn Firecrest at Hilbre by 2 days and we now have had as many Firecrests this autumn as Goldcrests ! let's hope there will be a passage of Goldcrests yet to come.
Other birds seen on the brief visit :- a Common Snipe, 2 Chiffchaffs and a Willow Warbler, and 3 Little Egrets.
Ringed:- 1 Firecrest, 1 Chiffchaff, 1 Willow Warbler.
(BSB,CJ +VB,CJW et al) [430] photos CJ
Posted by Colin at 16:58