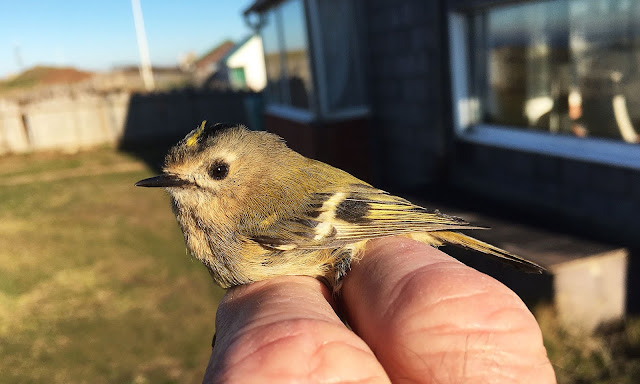 A quiet morning despite the south easterly, the feature today was the arrival of 5 Goldcrests in the paddocks and gardens, one of which became the first ringed this year. The only finches passing through were a total of 9 Siskins calling overhead and there were 2 Linnets on the ground. Three Pied Wagtails and a single Skylark flew over. Just 2 Eider today, the adult male could not be seen, but 2 male and a female Mallard were flying around, possibly they are preparing to breed. A Peregrine hunted the ridge south of Middle early on, circling low over the observer several times. Purple Sandpipers were not seen, and meaningful counts of other waders could not be made at low tide.
photo CJ
Ringed: 1 Goldcrest.        [ 6-6 ]
Posted by Colin Jones at 14:05