The wind had turned completely to the south this morning, but the much hoped for easterly did not really materialise ('there's always tomorrow...'). 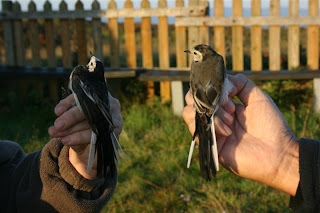 However, a couple of Chiffchaffs were present early morning as was a Wheatear and an early morning Sparrowhawk passed through. The first 'round' of the traps resulted in a surprise - a retrap male Pied Wagtail (ringed in May) as well as a new juvenile bird; perhaps they had been roosting in the 'Heli' trap overnight (see left).

The Robin passage of recent days increased today with six new birds caught and at least nine birds on. A Whitethroat was caught during the morning but other warblers evaded capture until the afternoon when a retrap Willow Wabler and a new Chiffchaff were caught. 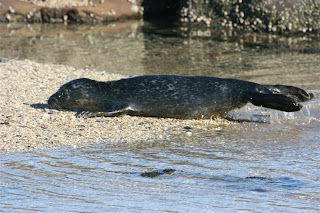 A drake Tufted Duck and the first Pintail of the autumn (two) provided the wildfowl interest and a superb summer plumaged Red-throated Diver drifted on the tide but little else in the way of sea-birds was noted. 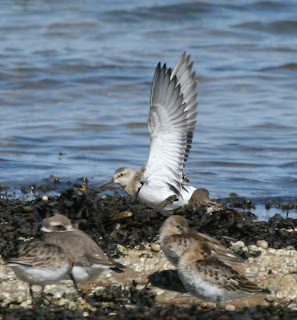 The highlight of the day was found amongst the roosting flocks of Dunlin and Ringed Plover, a juvenile Curlew Sandpiper was picked out and showed very well over the high tide period (left and below right). The waders being much less disturbed by visitors today than yesterday. 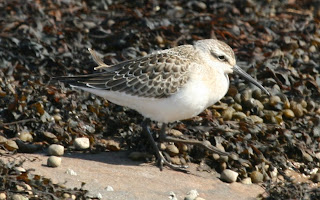 Many hundreds of Dunlin and Ringed Plover (below) flocked on the exposed rocks at high tide. 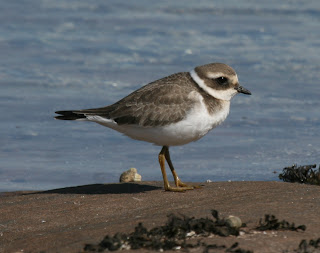 As afternoon turned to evening the fourth Sparrowhawk of the day appeared shooting through the Obs garden chasing one of the resident Dunnocks - the Dunnock dived straight into the net which probably resulted in the Sprawk seeing the net at the last minute and quickly taking diversionary tactics before alighting briefly on the BBQ from where it gave the Dunnock a cursory glance before heading off north. The Dunnock was extracted from the net and released unharmed. 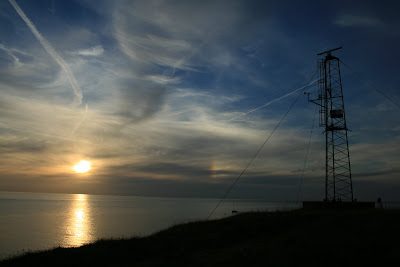