Weather: S, force 0/1, increasing soon to SE force 2/3 heavy mist and fog.
Thick fog and mist around the shore and the island for most of the morning was the story of the day. Viewing was restricted mainly to what was on the ground, although some flyovers such as Skylarks (over 20) and Starlings (8) were noted, also 6 Redwings and a Fieldfare which were mostly very early on before the fog descended. Also grounded were 6 Goldcrests, 2 Blackbirds, 3 Song Thrushes, 4 Pied Wagtails and a Chaffinch which may have been the bird from yesterday. Similar numbers of Wrens (9) and Robins (10) present today as yesterday, but no sign of the Yellow-browed Warbler here the last 2 days. A Canada Goose was heard over the island in the fog and a Merlin was perched on the lookout roof before sitting at the north end (below,CJ). 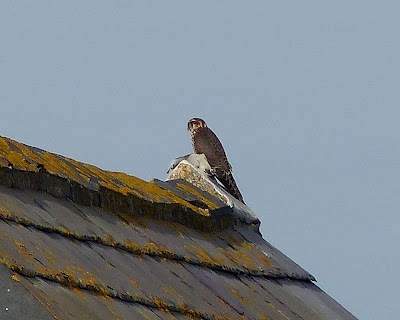 Not surprisingly very few sea birds recorded ( 2 Great Crested Grebes, 1 Common Scoter), while the wader highlight were 3 Purple Sandpipers on the west cliff before flying to roost on Middle with the 3,500 Oystercatchers (only seen vaguely through the mist).