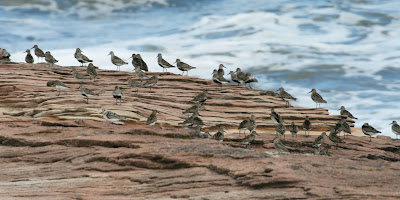 A higher tide today than for some time with wading birds having to vacate the shore for the top of the island (left, Dunlin with a Sanderling). The wind was in the south west first thing but soon veered west and then north west and was quite strong in the early afternoon.
Only a trickle of migrants were found as expected in these conditions including 2 Whitethroats (one was from yesterday), 4 Willow Warblers, a single Wheatear, an out of season Song Thrush, and a slow passage of 38 Swallows.
Good shorebirds were a Golden Plover flying over the west side shore, 2 Common Sandpipers that appeared briefly at the north end, 14 Bar-tailed Godwits including one in summer plumage, 500 Dunlin, 150 Ringed Plover, 4 Sanderling and 2 Grey Plover..
Three Collared Doves were between Red Rocks and the island and also there was the Peregrine sitting on its usual yellow barrel.
The Sandwich Terns are now at about 850 birds, Common Terns are considerably scarcer, while the Black Tern was seen only at 07.15hrs flying strongly away to the south west, it remains to be seen whether it will make any more appearances at Hilbre. Many Gannets were again on the sea but little else although there were 10 Red-breasted Mergansers moving together towards the north shore, and 6 Great Crested Grebes off the west side in flight.
Ringed:- 3 Willow Warblers, 1 Whitethroat, 1 Linnet, 1 Meadow Pipit.
(DB,CJ,CJW et al) [378] photo CJ
Posted by Colin at 15:33