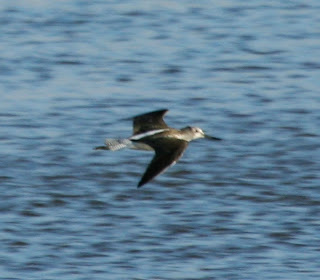 A check of the log sheet at the end of the morning looked quite impressive, but the day was somehow unsatisfactory in that the views of significant birds were brief or in the case of the Green Sandpiper completely lacking as it was heard calling along the shore but not seen. Others deciding not to display themselves were a Bonxie which was on the sea close to the west side for a few seconds then disappeared, a Greenshank (right) seen just once in the east gutter, a Stonechat (probably yesterdays bird) that flew over the obs garden into the bracken and was not seen again.
At least an increase of Wheatears (below) took place with 5 on the main island in the usual places, but only a single Willow to represent the warbler family. Ten Swallows only was the total for the morning. 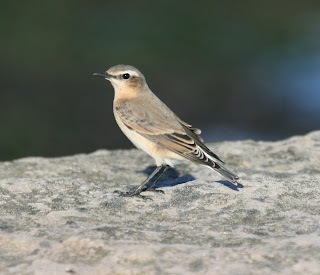 Manx Shearwaters were again very distant with 300 estimated off to the north west sometimes whirling in feeding flight, 6 Guillemot and 21 Common Scoter were a little closer with 50 or so Gannets that never approached the island. Four Arctic Skuas were chasing the numerous terns over the high tide period.
No birds ringed