A Black-necked Grebe was seen at the north end by a visiting birder early this morning, unfortunately it did not hang around and was last seen flying off towards the Burbo windfarm. 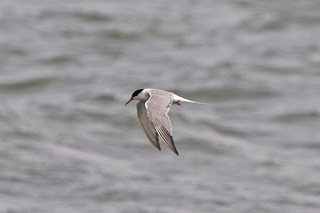 This is a rare bird at Hilbre, but the sighting coincides with the post breeding dispersal of juveniles of this species.
More dependable was the by now familiar Black Tern which again made several appearances feeding with other terns including Common Tern (right) at the north end.
Two separate Tree Pipits called overhead this morning, a good early autumn record for this 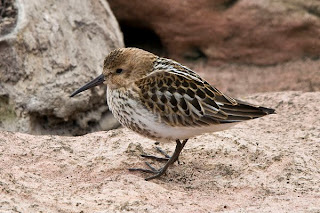 species that occurs more often in spring. Three Wheatears and 3 Willow Warblers were also a pleasant surprise in the north westerly wind today.
A second summer Mediterranean Gull was with many Black-headed Gulls on the shore to the south east of Little Eye on the ebb tide. 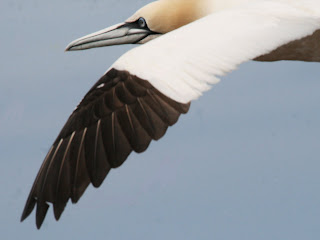 About 40 Gannets were on the sea, but one adult for some reason kept making very low passes over the island, on one occasion too close to fit in the photo (right)!
Other notable sightings were 12 Bar-tailed Godwits, 5 Little Egrets and close views of Turnstone, Dunlin (above), and Ringed Plover at high tide.
Ringed;- 3 Willow Warblers, 1 Linnet.
(CJ,CJW et al,PSW,SRW) [364] photo CJ (Gannet), PSW
Posted by Colin at 16:05