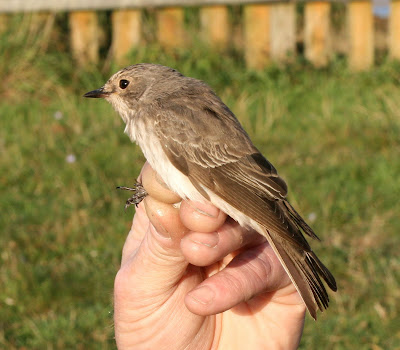 A beautiful calm sunny morning dawned with many thousands of hover-flies about the bracken, most were the common 'Marmalade' species episyrphus balteatus, but there were also many of the slightly bulkier syrphus ribesii and the larger black and white scaeva pyrastri (above, shield bug picromerus bidens, above right). This was much the same mix as seen previously (see 15th August). 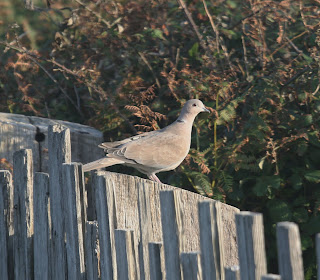 The birds were similar to yesterday, in that there were few, but there was one star bird: yesterday the Redstart, today the Spotted Flycatcher (above) which was in the SK trap at the first round. One of the 2 Willow Warblers present was ringed on 6th of this month and not re-trapped since - has it been off to the mainland for a while ? A Garden Warbler (presumably the bird from 25th) was heard several times in various bramble patches but failed to show itself while the 2 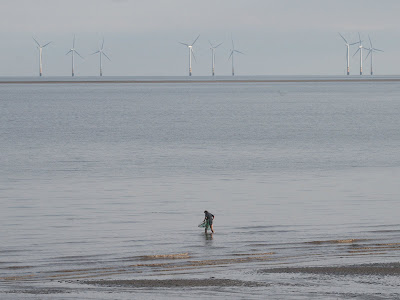 Wheatears were 2 more than yesterday, and a troop of 4 Collared Doves (above) enlivened the paddocks for an hour or so. Again no Whimbrel or Greenshanks first thing this morning, but a dozen or so Bar-tailed Godwits were on the east hoyle bank.
Another obs member was seen wading in the tide today (right) - this time the quest was for scientific knowledge of marine biology rather than a flock of Goosanders !
(photos Shrimp left and Plaice right)
Ringed :- 1 Spotted Flycatcher, 1 Willow Warbler, 1 Dunnock.