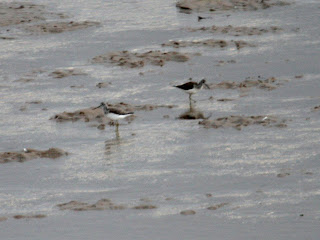 After yesterdays blow, the wind dropped overnight to a very light westerly, and a before tide visit found 2 Greenshanks (left) in the gutter east of Middle instead of the one that has been logged for the last week or so. Later on the flood tide 3 Greenshank flew in from the Red Rocks direction, landed briefly with the Oystercatchers and then went off to the south west.
A Garden Warbler was elusive in the south end bracken and failed to be ringed but at least it was the first record this year on Hilbre. Three Willow Warblers likewise were not co-operating but 2 new Robins in today were more accessible. Six Swallows were logged up to midday.
Shorebirds included 6,000 Oystercatchers, 2 Whimbrel, 5 Little Egrets, a large count of 30 Bar-tailed Godwits, and 4 Sanderling.
Two Greenland Wheatears were only seen early in the morning and so it was a huge surprise when 9 were on Little Eye just before the tide, the shift of wind direction at that time from west to east may have had a bearing on the arrival.
Ringed:- 2 Robins, 1 Wren
(BSB,DB,CJ,MGT) [399] photo CJ
Posted by Colin at 12:32