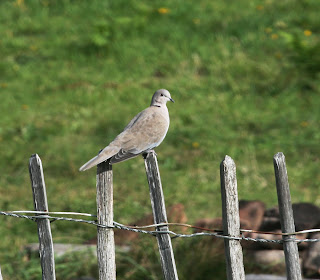 A Sparrowhawk (probably the same as yesterday) spent most of the morning around the island before flying off towards Wales, finch feathers in the entrance of the SK trap were evidence of its stay. Two Peregrines made a brief appearance over the south end, two Collared Doves (left) flew around the island avoiding the mist nets and settled for long periods on the fencing, but birds of the day would be the 2 Black-tailed Godwits that flew west separately down the Dee (below) and the Greenshank that appeared in the east gutter. The Little Egret count today was 5, while Redshanks increased to 90.
No warblers were to be found first thing but later a phylloscopus warbler with an unusual call was heard and briefly seen in between bouts of 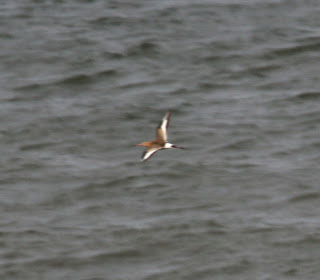 diving into bracken. It appearance however seemed normal and it was thought to be one of the Chiffchaff races from Northern Europe. Later a Willow Warbler dropped in to keep it company. Two Robins were fresh in today but the only Wheatear was on Middle before the visitors arrived. Twenty six Swallows were counted and a group of 35 House Martins flew south west between Middle and Little Eye.
Ringed:- 1 Willow Warbler, 2 Robins, 1 Linnet.
(DB,CJ) [394] photos CJ
Posted by Colin at 13:02