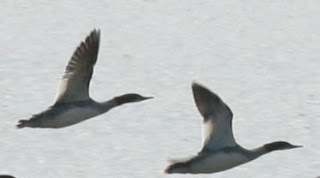 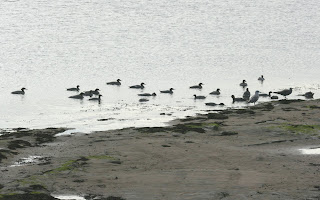 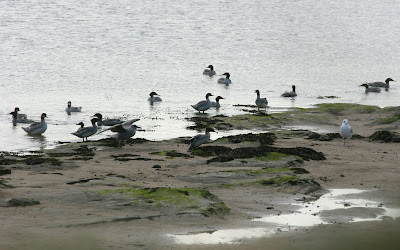 Just before high tide an unprecedented group of 31 Goosanders were found off the east side of Middle Eye (left and above). The flock floated slowly south and were then hidden from view from the obs, but one intrepid member waded across to Middle (below left) and stalked them commando style in the bracken to obtain good views and photos at the south end of the island. Some of the birds came out on the sand before they departed together towards the 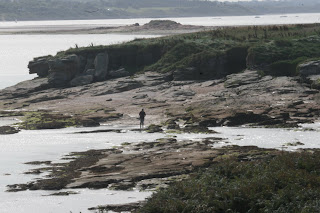 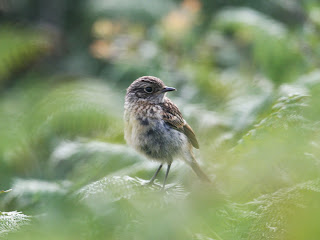 Up until that point the main attraction was a juvenile Stonechat (right and below) that appeared in the obs garden and spent the next few hours touring the paddock areas and avoiding the mist nets. This is the first Stonechat this year, normally at least one is seen in early spring on Hilbre. 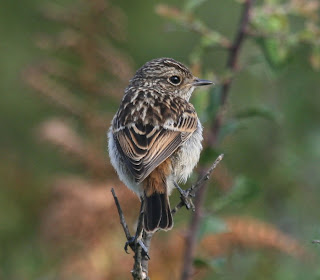 A short sea-watch proved there were still some Manx Shearwaters (50) in the area but distant (see yesterday), along with about 35 Gannets and a single distant Arctic Skua.
Later a Greenshank was found in the east gutter.
Hirundines were again scarce with just 5 Swallows noted all morning, and the other regulars were also in small numbers:- 3 Little Egrets, 3 Whimbrel and 1 Wheatear. 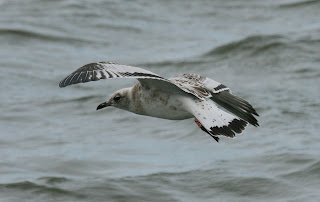 A juvenile Mediterranean Gull was on the West Kirby marine lake with the Black-headed Gulls after the tide (below). The bird was bearing a colour ring (right, click picture to enlarge) and enquiries are on going but initial thoughts are that it may be from 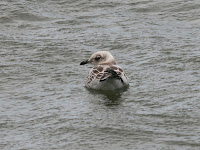 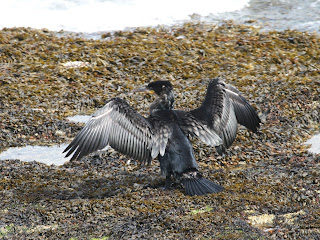 Considering the wind was from the west/south west, all in all not a bad day but no birds ringed, so a picture of a Cormorant at the north end instead.
(AMC,JE,CJ,SRW) photos CJ, SRW (Goosanders and others)
Posted by Colin at 14:20

The only Goosander that I've seen on Wirral (RR x2 and home once) have been three separate flocks in the c15-25 size range and all in the last week of Aug and the 1st week of Sept. I'm guessing that the are dispersing Welsh birds. All three flocks would have flown past Hilbre.

Thanks Jane, they also occasionally occur at the south end of Wirral (Shotwick lake/Inner Marsh Farm) at this time of year (late Aug/early Sep). Cheers
Steve