A Black Tern arrived down the east side at 10.30hrs and stayed to feed for about an hour in the east gutter just off Niffy bay. Talk this morning was of how scarce they had been everywhere this year and as so often happens birds appear as if on cue, unfortunately members with 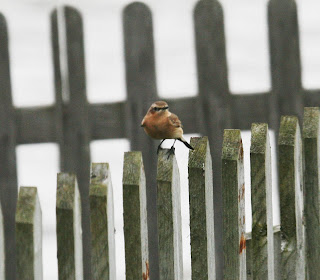 cameras had just left the island as everything was so quiet today.

The north westerly wind was stronger than yesterday but stangely sea birds were much less numerous, only 10 Manx Shearwaters first thing, 25 Gannets and 3 distant Arctic Skuas. No sign of yesterdays hippolais and the only land bird of note was a single Wheatear down the sheltered east side of the island (right).