A probable hippolais warbler was seen briefly this morning at 09.30hrs near to the ' heli ' trap. The bird was of a substantial size, green/yellow and with a largish bill, and was possibly a Melodious or Icterine Warbler but unfortunately the bird immediately disappeared and could not be relocated. The news naturally sparked a mini twitch of members from the mainland, but despite extensive searching of the island for the next few hours there was no further sign through the day. 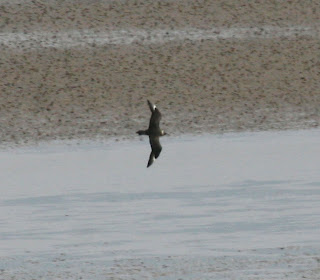 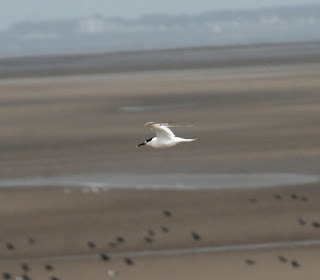 the sandbanks (above) putting up the 500+ Sandwich Terns there (right).
No Swallows at all today and just a single Swift in the morning to vary the species list. Three Willow Warblers present but none were ringed in the strong north west wind.
Ringed:- 1 Linnet.
(BSB,DB,AMC,FD,CJ,KMc,CJW,NDW) [342] photos CJ
Posted by Colin at 16:33