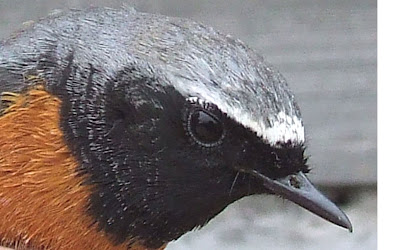 A dark and misty morning that looked promising but failed to produce the warblers of yesterday, though still came up with two new spring arrivals for this year. A fine second calender year male Redstart (left) was trapped and ringed and a Whimbrel called around the island to announce its arrival and showed well during its first sighting this spring for the obs members.
Just a single Willow Warbler in contrast to Red Rocks that had many more warblers, exactly the reverse of yesterday, strange is the mysteries of migration.
Swallows were counted at 121 after a good passage in the afternoon, with 2 House Martins, and 20 Goldfinches and a Siskin being the only finches apart from 40 Linnets, some of which may be the residents breeders.
Other migrants were 100 Meadow Pipits, 5 Wheatears and 3 White Wagtails (a lot fewer than yesterday). A Wood Pigeon and 2 Canada Geese were logged later in the day.
Twenty Gannets and 10 Sandwich Terns was a reasonable return for a low tide with an easterly wind.
A member walking off the island recognised a 'ringtail' harrier, probably Hen Harrier as it flew over the shore, across the marsh and then inland to the golf course. 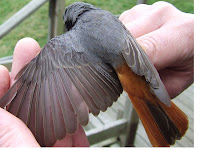 Ringed today:-
1 Common Redstart (right)
1 Goldfinch
1 Willow Warbler (left)
The Redstart was aged by a moult limit in the greater coverts and the wear in the tail.
The Willow Warbler shows the long primary projection that can distinguish it from Chiffchaff in the field.
(DB,JE,) photos JE
Posted by Colin at 17:41