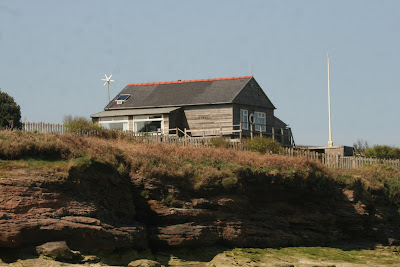 Yes, this picture of the observatory was taken today, regulars will notice the wind turbine is back on the roof following the installation of a new unit by volunteer members this morning. 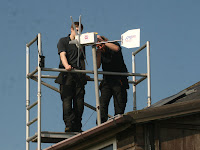 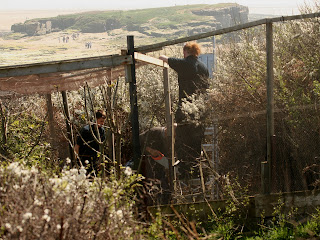 Later a start was also made on the re-building of the 'SK' trap (left) which has been needed for some time now.
Luckily for the workers there were not the distractions of yesterday in terms of star birds, despite the apparently similar weather conditions, with no new Willow Warblers and just a single new Chiffchaff and 4 Wheatears. There were however good numbers of Goldfinches (22), and Lesser Redpolls (bottom left) (16) with 10 White 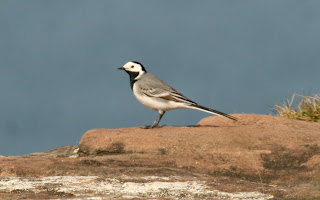 Wagtails (below) looking very attractive when they landed around the cliffs, and in the afternoon 2 Yellow wagtails went over. 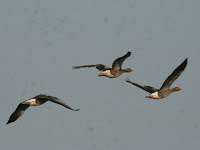 Several 'odd' species during the day including 4 Collared Doves, a Sparrowhawk off the north end, a House Sparrow on the Cox's bungalow roof (below right), a Rook overhead going west and 3 Greylag Geese (left above) that flew by and then swan for a while on the east side. 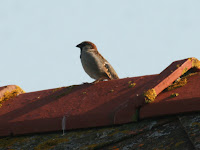 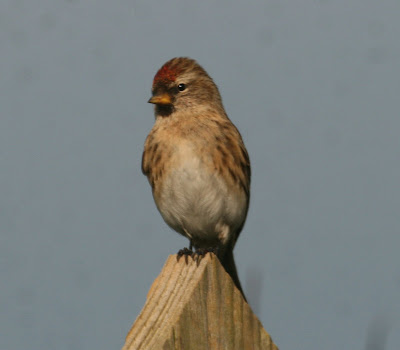 Seven Gannets were close in to the west early in the day and 6 Sandwich Terns made their presence known vocally, while the lone Brent, 2 Scoter and a single Red-breasted Merganser just sat on a very calm sea.
Seven Small White butterflies flew in a warm sunny day with a Small Tortoiseshell and a Speckled Wood ( still a scarce record on Hilbre).
Ringed today:-
3 Lesser Redpolls
2 Goldfinches
1 Chiffchaff
(CJ,PGR,CJW +2) photos CJ, work by the others !
Posted by Colin at 15:42