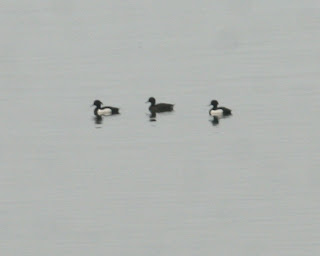 The usually exciting month of April opened with an exceedingly calm day and the sea at times being like a mirror. Three scarce Hilbre species were noticed early:- a Jackdaw over Middle, 3 Tufted Duck (right,very scarce) off the west side and a Lapwing (below) on the whaleback. 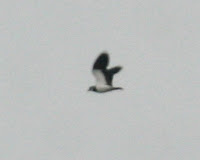 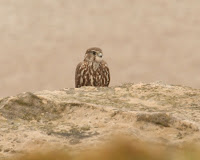 The Merlin (left) still decided to stay about the cliff, giving close views to anyone who approached slowly and quietly.
There was more movement than in recent days and 8 Goldcrests arrived during the morning together with a Reed Bunting, a Dunnock, 3 Pied and 2 White Wagtails and a single male Lesser Redpoll (below) that sat on the obs fence. 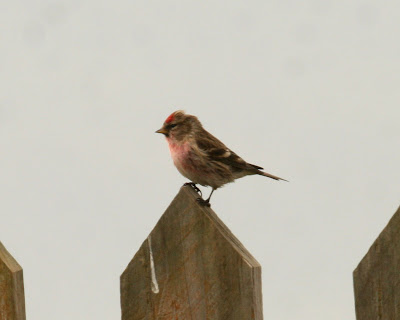 The first 2 Swallows of spring for Hilbre went south and east as did 17 Sand Martins. Hirundines are known to normally arrive at the north end from the west and travel south and east in spring contrary to what one might expect.
In the afternoon 2 Ravens landed on Middle and later went off to the east.

Five Goldcrests were ringed together with 2 Meadow Pipits, a Robin and a Wren. The Redpoll made several attempts to fly into a mist net but failed miserably.
(DB,CJ et al) photos CJ
Posted by Colin at 14:15