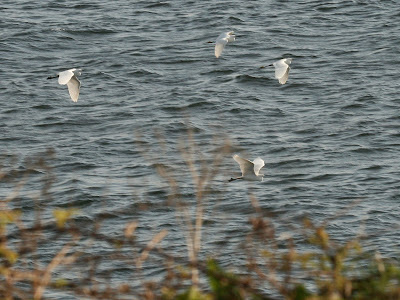 A fairly quiet morning with only small numbers of migrants considering the date, the mist and the southeasterly breeze. A single Wheatear on middle was the sole representative today and with only 5 Willow Warblers and no Chiffchaffs to compensate, the highlights were the male Blackcap (below) found in the new obs garden and the elusive Grasshopper Warbler singing in the SK paddock, which was eventually caught late afternoon. Another was heard in the Obs garden mid morning and was thought to be a second bird...how many more are lurking?
Again only about 30 Swallows passing, but the single House Martin and 5 Sand Martins were welcome. Goldfinches again were the majority of the finches overhead with just 6 Redpolls and a Siskin, while unlike recently only 2 White Wagtails seen.
Four Little Egrets flew up the east side and then turned about and did a splendid flypast for the observers at the bottom of the obs garden (above). 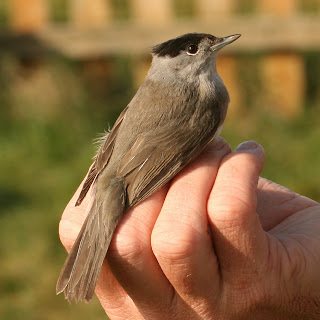 Whimbrel totalled 16 around the islands and the sea held many Gannets and Sandwich Terns feeding, especially off the west side just before the tide. Common Terns are now starting to appear and 8 were noted today, and a single Kittiwake was also logged.
Ringed today:-
3 Willow Warblers
1 Blackcap
1 Grasshopper Warbler
(BT,DB+2,CJ,KMc,PSW,et al) [226] photos CJ
Posted by Colin at 13:16