Heavy mist just after dawn made it feel very cold in the strong south easterly breeze, but a quick search of Middle cheered members when 2 Fieldfares and a Redwing were noted. Another Fieldfare and Redwing were on the main island during the morning but no sign of any warblers or Goldcrests, and finches were counted only in single figures. Meadow Pipits however went through at a conservative estimate of 140. 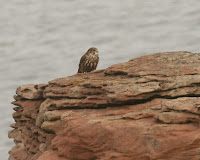 Meanwhile the Merlin (left) still keeps a watch on the small birds around, although other than the pipits not much for it to choose from today :- single Blackbird, Starling, Dunnock, Wood Pigeon would not be a main target species, but the 2 Wheatears and the 4 Pied/White Wagtails might.
Three Scoters were close in to the east side and 10 Purple Sandpipers on the shore but the Brent were apparently elsewhere as just a few lingered at the north end. 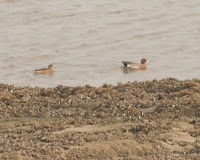 A male and female Wigeon (right) were off the north east corner later in the morning and then as the sun came out 2 more Sand Martins and a Swallow flew south east to add to the 2 Sand Martins noted earlier.
All in all a slightly disappointing day for a misty south easterly in April. 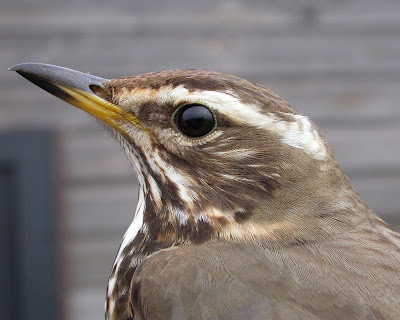 Ringed today:-2 Chaffinches and a Redwing