Despite a south-easterly breeze the clear skies and good visibility meant that observers were not confident of a good day - but there was always the chance of an Osprey...
Grounded migrants were very thin on the ground with single Goldcrest and 2 Wheatears present. The only bird caught was the recently evasive Dunnock which gave itself up at last in the SK and a re-trap Meadow Pipit.
Up to 7 Purple Sandpipers were still present and over 120 Turnstone including many colour-ringed birds from past years including the Purple Sandpiper ringed this winter (see photo below). 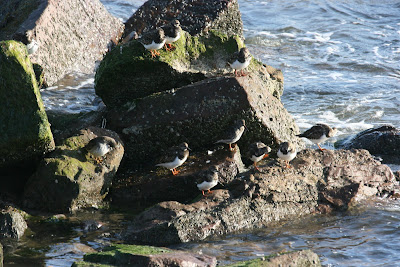 At about 945hrs a large bird was spotted from the Obs window as it headed over Caldy Hill and cut the corner of the Wirral - a quick dash onto the veranda and the scope provided good views of the first Osprey of the spring as it continued over Hoylake before being lost to view. 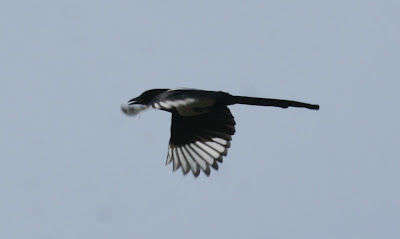 A Magpie (opposite) and 3 Canada Geese were also typical early April visitors. But no hirundines by midday despite the warm weather. The pair of Common Scoters remained around the island like last spring...(see photo below - drake above and female below). 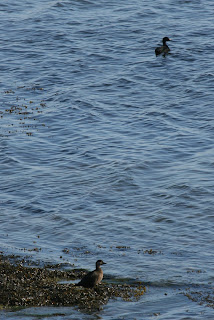