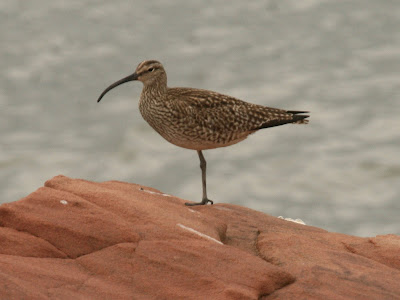 More cloud this morning but still a southeasterly, and the day started well with 6 Redpolls into the Newton trap and a small number of Willow Warblers also present. Goldfinches also featured early on but decreased as the morning went by. Five large Greenland Wheatears stayed around for a change and a Yellow Wagtail landed briefly on the mound east of the pond, (our photographer was too slow with his camera on this occasion).
Sixteen Whimbrel (above) were calling on the west side rocks, likewise most of the Gannets, Sandwich and Common Terns fed down the Dee to the west of the island, but the female Scoter (below right) was on the east side. The high tide however was disappointing, the best sighting was a jet (Eurofighter?) flying low close to the island. 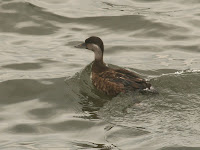 The breeze swung back and forth between southwest and southeast, and then the atmosphere became quite muggy and suddenly there was another fall of Willow Warblers (below left) just before noon, which may have also brought the Grasshopper Warbler found at the south end. 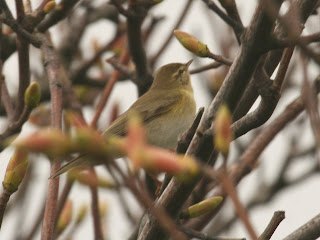 Swallows were into three figures by early afternoon and at 14.30hrs an Osprey flew from the west over the island and went off towards the northeast being mobbed by the large gulls. By this time our photographer was halfway to the shore and was too distant to take any pictures, maybe better luck with the camera tomorrow! 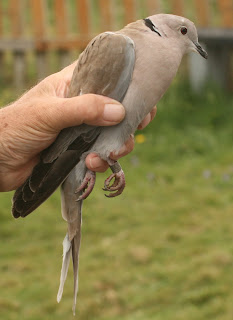 Been reliably informed that the plane is a Tornado G4. ;-))

Cheers Phil,I will have to improve my plane ID skills !