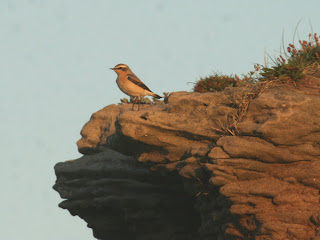 The morning was probably too clear for good migration at Hilbre, it is often a bad sign when the Great Orme is visible. Nevertheless there was a small trickle of Willow Warblers early on and 10 Greenland Wheatears most of which seemed to be on Middle (left). 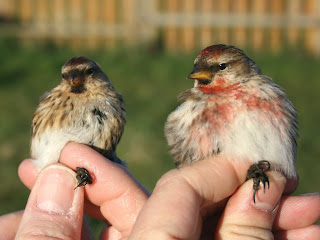 For the third day running a Mealy Redpoll was trapped - surely they are not as scarce as was once thought ! Comparison with Lesser Redpoll makes it easy to see why they were split as a different species.
A Grasshopper Warbler almost flew in through the open obs door and then went round the back of the building and hit the kitchen window, the bird survived and hid behind the water tank.
A few Goldfinches and Redpolls went through with 7 White and a single Yellow Wagtail and a female Goldcrest that was late in the season to appear at Hilbre. Some Swallows and a single Sand Martin were the only hirundines and a Collared Dove was the only unpredicted species.
A small number of Sandwich terns and Gannets were on the sea with 12 Arctic Terns flying south down the Dee.
Ringed today:-
4 Willow Warblers
3 Goldfinches
2 Lesser Redpolls
1 Common Redpoll
1 Chiffchaff
1 Goldcrest
(CJ,DCT,PT,NDW,SRW,TGW) [319] photos CJ & SRW
Posted by Colin at 10:57