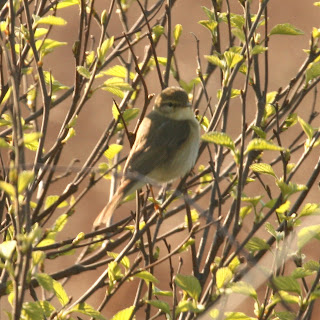 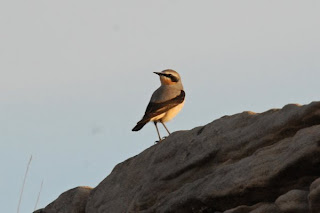 A Wheatear at Little Eye and a few Willow Warblers on Middle showed there had been a small movement through early after dawn, and so it proved on Hilbre as 20 Willow Warblers (above left) and 2 Chiffchaffs were noted during the morning but no larger warblers yet, these should come during the next couple of weeks. Eight Wheatears (above right) went through but did not stay to feed, perhaps 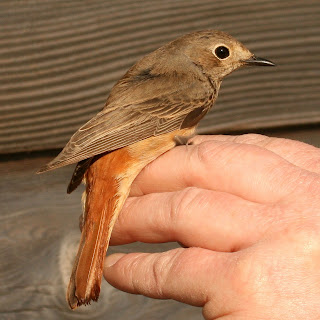 discouraged by the reappearance of the Merlin on the west cliff.
A female Redstart (right) was in the Newton trap mid-morning and was the second for the island this spring, and 2 Goldfinches were caught out of 9 that went over, other finches flying by were 6 Siskin and 2 Lesser Redpolls. A total of 18 White Wagtails passed in small groups and a single Yellow Wagtail was heard late morning, while a visiting Skylark sang briefly to remind those present that they used to breed on the islands.
Whimbrel (below) are now starting to build in numbers, the latest individual seen at Little Eye adding to the two already present. No Sand or House Martins today, just Swallows passing in very small numbers. 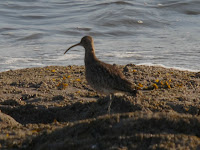 Sandwich Terns continue to feed off the north end, 12 today with 2 Gannets and 3

Red-breasted Mergansers (right).
A dead Harbour Porpoise (below) was found lying on the 'whaleback', however a happier sight was when the warm sunshine brought out 2 Small Tortoiseshell and a Small White butterfly (below right). 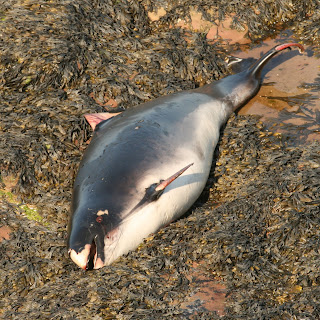 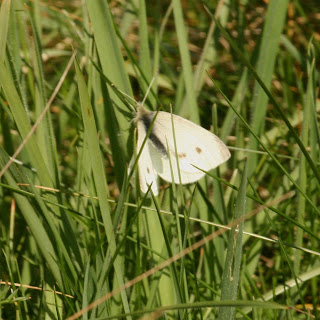 There were 7 Whimbrel on the rocks between Middle and the main island at about 2pm today. Colin Davies

Thanks Colin, good to see you over on the island. Cheers
Steve