A Black-necked Grebe drifted down river passed Hilbre at 10.15hrs this morning, a less than 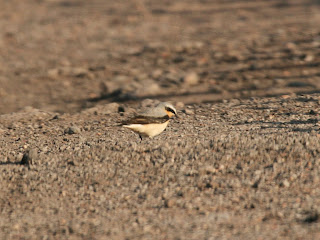 annual visitor to the islands. Sixteen of the commoner Great Crested variety were on the sea early in the day along with 4 Teal, the 2 Velvet Scoters and the Little Gulls feeding off to the north west. Corvids were noticed early on moving west including a group of 18 Rooks and 2 parties of 8 and 10 Carrion Crows. At the same early hour a Merlin lifted from Little Eye and flew off to the north east. 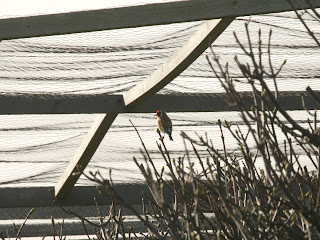 Not much movement overhead with only a minimal numbers of finches, although 2 Goldfinches stopped to examine the feeder in the Newton trap (left) and received shining new rings at no charge.
The only Warbler was a single Willow that was also ringed but other good passerines were very scarce, just 3 Greenland Wheatears (above right) and a single White Wagtail.
Ringed:- 2 Goldfinches, 1 Willow Warbler, 1 Wren.
(DB,JE,CJ,CJW) + SH [105] photos CJ
Posted by Colin at 11:25