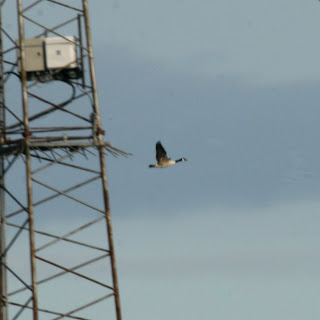 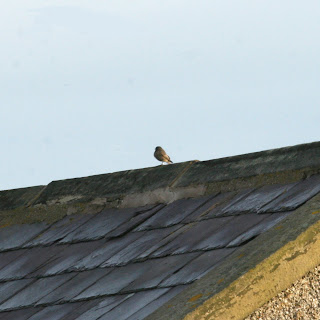 The Black Redstart that was ringed on 27th March has been quite elusive for a fairly conspicuous bird and today was no exception, giving brief glimpses, but it did show for a few seconds on top of the buoy-master's house (above left); some more photos of this bird from last week appear below. Other birds deciding to stay awhile are the 2 Wheatears that arrived on the 25th and 26th March that are still enjoying the islands hospitality (as well as four others), likewise one of the Blue Tits from yesterday.
There was no sign of any hirundines until mid-morning when the first House Martin of the year went through, and later a Sand Martin and 25 Swallows. 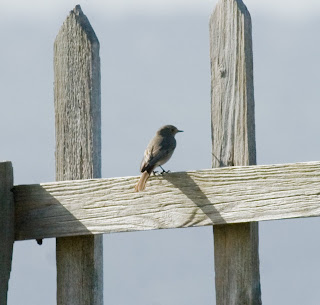 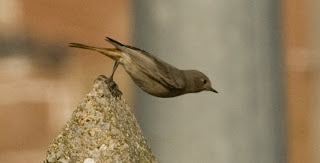 Flying visitors this morning were a Canada Goose (above right) followed by a group of 8 more, and a sole Reed Bunting, but very few other noteable records.
Some Little Gulls are still showing off the west side, but distantly today; later 30 were counted. Special attention was taken to examine all visible gulls (of which there were many thousand large gulls feeding on star fish that have been wrecked on the sand banks and particularly following the discovery of Iceland and Glaucous Gulls (by obs members - see post below) off the north Wirral coast in the last few days.
Early this afternoon 2 Velvet Scoters drifted down the west side and then flew back towards the north end (see below). Later they were relocated 'loafing' off to the North East (they were also seen distantly from Red Rocks). 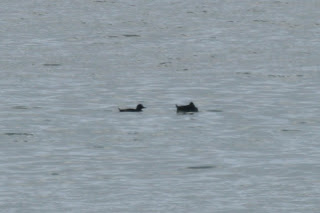 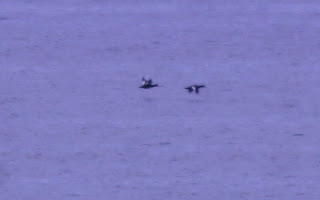